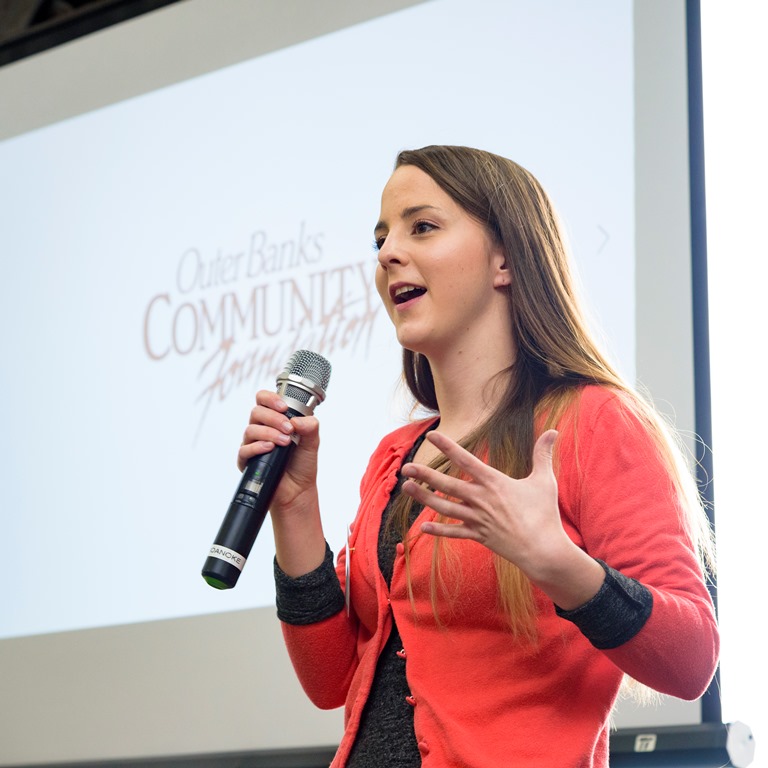 The Outer Banks Community Foundation honored Josephine Oden at its annual meeting on February 19, naming “Miss Jo” posthumously as the organization’s 2019 Champion, in recognition of her role in starting the foundation’s scholarship program. Two new board members were elected by the foundation’s members, and two departing board members were honored.

Photographs of the event can be found here.

The meeting was sold out this year, with 175 guests attending. The crowd celebrated $750,000 in grants and scholarships awarded to the Outer Banks in 2018, and almost $9 million awarded since the Community Foundation’s establishment in 1982.

The event featured exhibits from several local, historical nonprofits that had received grants from the Community Foundation the prior year, including the Pea Island Preservation Society, the Chicamacomico Lifesaving Station, the Ocracoke Preservation Society, and the Friends of the Outer Banks History Center.

Members of the Community Foundation unanimously elected two new directors for the organization’s board: Jean-Louise Dixon of Buxton, and Noel Preston of Martin’s Point. Ms. Dixon is a practicing attorney, and Rear Admiral Preston is a helicopter pilot retired from the US Navy. Board terms for Jane Webster and Ray White were renewed by the members.

Two retiring board members were thanked for their outstanding service: Teresa Osborne of Nags Head, who served as the Community Foundation’s president in 2017 and 2018, and Chris Seawell of Manteo, who served as vice president and grants chairman.

Mr. Seawell announced the winning videos from the Community Foundation’s annual contest. Chicamacomico Lifesaving Station came in first place, followed by Ocracats in second place, and the Outer Banks Center for Dolphin Research in third place. The winning videos can be viewed online by clicking here.

Miss Jo, her sisters Ramona Hunter and Sybil Skakle, and their sister-in-law Ruby Moser, gave the first Inez Daniels Austin Scholarship in 1976 in honor of their mother, and moved the funds to the Community Foundation in 1984 to ensure the scholarship’s perpetuity. In so doing, Ms. Robinson said, Miss Jo started the Community Foundation’s entire scholarship program, which today includes over 50 scholarships that have bestowed more than 1800 awards and $2 million to local students attending college. Miss Jo passed away in 2017, and her son, Jeff Oden, accepted the Champion Award on his mother’s behalf.

Miss Jo was a Legacy Donor and left a final bequest to the Community Foundation, which grew the Inez Daniels Austin Scholarship even further. Her family has subsequently started a new scholarship in her own name, the Josephine Oden Scholarship, which will grant its first scholarship to a deserving Hatteras student in 2019.

Photograph Above: Katie Phillips, the Community Foundation’s 2016 Sawyer Scholar, and keynote speaker at the foundation’s 2019 annual meeting. Photograph by Biff Jennings, Shooters on the Beach.

Community Scholarships: How Can We Do the Most Good