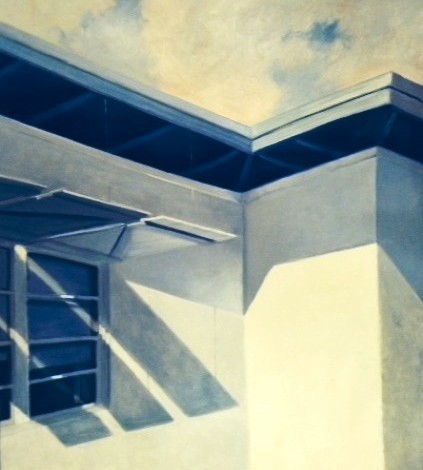 SOLD!!! A recent donation of a large oil painting by Helen Crouse will help preserve one of the last remaining Flat Top cottages of Southern Shores.

Debbie Weiland of Richmond, Virginia, donated a Crouse original to the Outer Banks Community Foundation to benefit the Flat Top Preservation Fund, a perpetual endowment that helps fund the maintenance, protection, and preservation of the 1953 Frank Stick Flat Top cottage at 13 Skyline Road in Southern Shores.

Crouse was a Flat Top lover, having spent many summers in Southern Shores in a Flat Top cottage built by her grandfather from blocks he cast by hand on site. As an adult she made a study of this vernacular architecture, painting a series of over 50 oils on the subject, including the donated work. In her paintings, she hoped to “capture this time before telephones, televisions, or air conditioning… when vacation meant being alone with nature and perhaps a book or a sketch pad.”

Debbie Weiland was another lover of this Southern Shores style. She spent 9 idyllic years on the Outer Banks with her husband, Joe, walking the beach, sunning among the dunes, watching sunsets, and tending fish ponds and gardens. They purchased the 24 x 36 inch “Structural Organic” in 2011.

“Structural Organic” depicts a sun-draped corner of the Knight Cottage at 113 Ocean Boulevard, examining the play of light on the architectural angles of the cottage’s quintessential soffits, juxtaposed against the natural shapes of a cactus and the cumulus clouds overhead.

Anyone wanting to contribute to the Flat Top Preservation Fund can do so via our website. Select “Other Fund” and choose the Flat Top Fund from the list that appears.