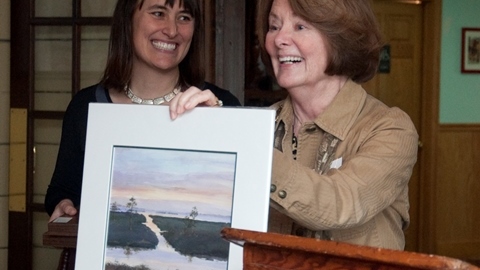 The Outer Banks Community Foundation held its Annual Meeting on March 19 to celebrate another record-breaking year of philanthropy. Board President Bob Muller led the meeting, which was attended by about 160 people.

From this metaphorical garden, she said, the Community Foundation “harvested” over $560,000 in grants and scholarships in 2014, even as its permanent endowment continued to grow for future grant-making.

Avery Harrison presented the Community Foundation’s scholarship highlights. She said that the organization had awarded over $140,000 in scholarships in 2014 to 89 local students. Ms. Harrison showed a video from Aaron Zeigler, a 2013 graduate of First Flight High School, who is the current recipient of the prestigious, four-year Sawyer Scholarship. Mr. Zeigler attends UNC Charlotte and will be interning with the Community Foundation this summer.

The Community Foundation named two Champion Award winners at the meeting. The first honoree was Pat Herman, a senior attorney with Vandeventer Black, who practices in both Norfolk and Kitty Hawk. Ms. Costa credited Mr. Herman with donating countless hours of legal counsel to the Community Foundation on everything from policies to endowment agreements to estate planning.

Ms. Hester honored the second Champion: the late Sterling Webster III, who served on the Community Foundation board from 2000 to 2002 and was instrumental in starting the Disaster Relief Fund, which has helped hundreds of families across Dare County recover after devastating storms. Jane Webster, Sterling Webster IV, and several employees from the Hilton Garden in Kitty Hawk and the Ramada Plaza on Nags Head Beach accepted the award. The late Mr. Webster was also one of the first to join the Community Foundation’s Legacy Society, declaring his intention to leave a planned gift to help the Outer Banks for generations.

Ms. Costa announced the establishment of 12 new charitable funds in 2014, including the Webster Family Fund. Other funds started in 2014 were the Preston Family Fund, the Christopher Ellison Fund for the Arts, the Scott Day Family Scholarship Fund, the R. Stewart Couch Hatteras Island Scholarship Fund, the BANXblock Beach Fund, the Love in Action Fund, the Liberty Christian Fellowship Endowment, the Friends of Whalehead Fund, the Buck Thornton Memorial Fund, the Franklin Y. Hundley Education Fund, and the Jim Wood Endowment for Children’s Arts.

The Community Foundation membership elected Scott Brown and Nancy Sugg as new members of the organization’s board of directors, and Scott Leggat and Loretta Michael for their second terms on the board. Jo Whitehead, Bill Massey, and the 2016 Board President were elected by the membership to the 2016 nominating committee.