The Dare County Arts Council and the Outer Banks Community Foundation have established a new charitable endowment to fund children’s arts programming. The Jim Wood Endowment for Children’s Arts was created in memory of the late Jim Wood, a bank trust officer, community philanthropist, and self-taught painter who lived on the Outer Banks from 1985 to 1993.

The initial gift for the fund was donated by attorney Carl O. Smith, Jr., of Rocky Mount, and his wife, Patricia, a professor at NC Wesleyan College, in the form of 14 watercolors — all framed originals painted by Jim Wood. Mr. Wood’s work has graced the cover of Ducks Unlimited Magazine and can be found in many important North Carolina collections, including those of Wells Fargo, PNC Bank, R.J. Reynolds, and Senator Richard Burr. 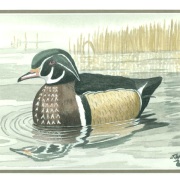 This original watercolor by Jim Wood of a Wood Duck was donated to the Community Foundation by Carl and Patricia Smith of Rocky Mount and is for sale in the Manteo gallery of the Dare County Arts Council, along with a dozen other Wood originals. All proceeds will be contributed into the Jim Wood Endowment for Children’s Arts.

“This is our third endowment fund with the Community Foundation,” said Chris Sawin, Executive Director of the Arts Council, “and we’re enthusiastic about it because it will provide our nonprofit with sustainable and reliable income in perpetuity.”

“Children’s programming is a huge and growing focus for the Arts Council, because we now have space in the restored historic courthouse to offer more classes,” continued Mr. Sawin. “This fall we’re offering kids’ workshops in painting, decoupage, mosaic, sculpture, screen printing, and more. With the Jim Wood Endowment, we hope to increase these offerings over time.”

“The Community Foundation manages endowments for over 35 nonprofits across the Outer Banks,” said Lorelei Costa, Executive Director of the Community Foundation. “These funds serve as consistent, easy, and permanent sources of revenue for these organizations, which is so important as competition increases for grants and individual donations.”

Mr. Wood not only created art, but also facilitated local art and philanthropy in ways that will benefit the Outer Banks forever. As trust officer for Peoples Bank and Centura Bank, in both Rocky Mount and the Outer Banks, Mr. Wood helped several clients establish charitable endowments that continue to benefit Dare County.

“Mr. Wood facilitated two of our largest bequests ever, from Ruth Medgyes and Dorothy Luedemann,” said Ms. Costa. “So far these two bequests alone have awarded almost $470,000 in grants to over 55 local nonprofits and over $420,000 in scholarships to over 220 Dare County students. And those numbers will continue to grow, because the bequests are invested as perpetual endowments.” 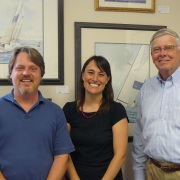 “I knew Jim for 25 years, first as a colleague at the bank, and later as a friend,” said Mr. Smith, who contributed the paintings for the fund. “Jim always believed in youth and the value of art for children. He would have been thrilled that this has been undertaken by an organization that he so greatly admired.”

Mr. Wood passed away in 2013 after a short but courageous battle with pancreatic cancer. He is memorialized forever through this endowment and survived by his wife, Kathy, of 39 years, a son, a daughter, and three grandchildren.

On her late husband’s behalf, Mrs. Wood accepted the Community Foundation’s Champion Award this past February in recognition of Mr. Wood’s outstanding contributions to the Outer Banks.

Anyone can contribute to the Jim Wood Endowment for Children’s Arts by purchasing a painting from the Arts Council at their gallery, located on the first floor of the historic Dare County Courthouse in downtown Manteo at 300 Queen Elizabeth Avenue. Additionally, anyone can make a tax-deductible donation to the fund by visiting www.obcf.org.

Top Photo Caption: Jim Wood at the drawing board with his granddaughter, Anna. In his lifetime, Mr. Wood was a champion for the arts, for children, and for philanthropy, and a new endowment fund for children’s arts programming has been named in his memory.