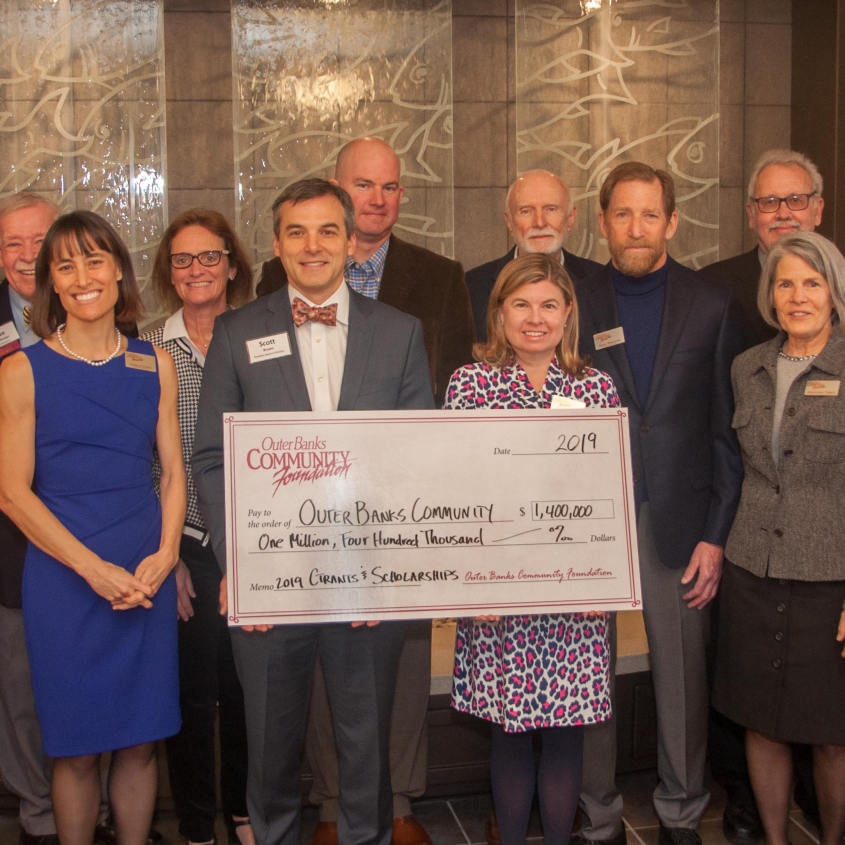 The Outer Banks Community Foundation’s membership honored two Champions, elected five board members, and celebrated $1.4 million in grants and scholarships in 2019 at the organization’s Annual Meeting on February 20.

The Community Foundation also announced a major new grants initiative at its meeting, the 2020 Vision Grants, which will be launched later in the year.

The Annual Meeting featured curated photography by Daniel Pullen, including hundreds of images of Ocracoke in the aftermath of Hurricane Dorian. A descendant of nine Cape Hatteras Lighthouse Keepers, Pullen has devoted his life and work to photographic storytelling. He has visited Ocracoke at least once a week since the storm to document the island’s recovery, and in 2018 he was named Dare County Artist of the Year.

Tom Pahl, Hyde County Commissioner for Ocracoke Township, gave the keynote address at the meeting. Pahl spoke about the extent of Dorian’s destruction on Ocracoke, and how the community pulled together in response. “I come bearing a message of gratitude … from everyone who has benefited so greatly from the Outer Banks Community Foundation Dorian Relief Fund,” said Pahl. “My message is simple and heartfelt: thank you. We were all brought to tears by your generosity.”

Community Foundation President Scott Brown spoke further of the organization’s disaster relief efforts. He said that more than 6,000 individuals, foundations, churches, businesses, and civic groups had contributed to Disaster Relief for the Outer Banks, donating $1.5 million for disaster victims in Ocracoke and Dare County. Mr. Brown said that $675,000 had been distributed so far to individuals and families, and another $700,000 had been committed for housing repairs and rebuilds on Ocracoke and Hatteras Islands. Further relief efforts are ongoing, he said.

The Community Foundation awarded its most prestigious honor, the Champion Award, to two entities at the meeting: first to TowneBank, for its lead gift of $150,000 for Dorian relief efforts, which the Bank committed just 24 hours after the storm. Taylor Sugg, President of TowneBank Currituck – Outer Banks, accepted the award.

Then, the entire Community Foundation staff presented an additional Champion Award to Bob Muller for his tireless volunteerism and heroic efforts in fundraising for Dorian. Muller not only led the Facebook fundraising efforts after Dorian; he also led outreach efforts to nonprofits after the storm to offer Rapid Response Grants, among many other projects.

The Community Foundation membership unanimously elected two new directors for the organization’s board: Ruth Toth of Ocracoke, and Pat Regan of Martin’s Point. Toth is a retired schoolteacher and restaurateur, and Regan is a retired food industry executive. Additional board terms for Nancy Caviness, Greg Honeycutt, and Clark Twiddy were unanimously approved by members. Ray White of Nags Head and Bruce Austin of Manteo, board members who completed their board terms in 2019, were thanked for their outstanding service.

Finally, Community Foundation Executive Director Lorelei Costa announced a new grants program for 2020, thanks to an anonymous gift of $105,000. The Vision 2020 Grants, she said, would be a competitive, one-year grant opportunity for one or two nonprofits serving the Outer Banks to receive $50,000 to $100,000 awards to address an urgent community need or opportunity. Costa said that the goal of the program was to make a tangible, substantial difference for the Outer Banks, to solve or at least “move the needle” on a significant community problem, or to seize an exciting opportunity that might not otherwise be within reach. Application details would be announced in March, she said.